April 2022: Karen Strier was featured in an interview in a prominent Brazilian scientific research journal, FAPESP. The interview is available in both English and Portuguese.

June 2021: Dr. Karen Strier is a panelist for the Daiwa Anglo-Japanese Foundation webinar on “Modern Human Society as seen by Primatologists” with Dr. Juichi Yamagiwa.

March 2021: Strier lab member Jacob Kraus was briefly interviewed in a recent episode of Travelogue: Exploring Hidden China. The episode documents some of the ecotourism, conservation, and educational activities surrounding black-and-white snub-nosed monkeys (Rhinopithecus bieti) in the Baima Snow Mountain Nature Reserve, where Jacob conducts his field research. Jacob appears in the video at the 20:25 mark.

October 2020: Dr. Karen Strier presents “Implications of social evolution and behavioral flexibility for primate conservation and management” at the Seminar on Frontiers in Social Evolution.

May 2020: Dr. Karen Strier receives a Recognition Award by Operação Primatas in Brazil.

May 2020: Both Dr. Karen Strier and lab member Irene Duch-Latorre are featured in the Art of Discovery supplement of the Wisconsin State Journal on Sunday, May 3, 2020. A photo showing Dr. Karen Strier at her field site in Brasil, by João Marcos Rosa, and two photos by Irene Duch-Latorre, illustrate the supplement along with other photos by UW-Madison scholar and researchers.

October 10, 2019: World’s top 25 most endangered primates report released. Karen Strier is quoted at the end of the article:

“This report helps us to focus on the plight of ALL primates whose futures are in danger. There is still time to take actions to save the most critically endangered primates from extinction and to protect other species from the increasing risks posed by human activities and global climate change.  Their problems are our problems insuring their survival increases our own chances as well.”

April 15, 2019: Karen Strier is featured on the podcast “People Behind the Science”, episode 497: “Dr. Karen Strier: Protecting the World’s Most Peaceful Primates”, available for listening and sharing at itunes and the PBtScience podcast’s website. If you would like to learn more about People Behind the Science, follow them on Twitter and Facebook.

December 13, 2017: Coverage of a recent publication in PLOSone, authored by Karen B. Strier & colleagues, assessing what data are needed in order to conserve the endangered muriqui monkeys.

May 13, 2017: Karen Strier interviewed on The PrimateCast about her long term research with the muriquis as well as education, outreach, and service to the field of primatology (audio: 15 mins 21 secs).

May 2, 2017: Karen Strier quoted in the New York Times regarding the yellow fever outbreak and howler monkey population collapse in Minas Gerais, Brazil.

March 21, 2017: Yellow fever killing thousands of monkeys in Brazil, the University of Wisconsin-Madison

October 2016: Karen Strier was elected as President of the International Primatological Society, 2016-2020.

June 2016: The muriquis and Karen Strier were featured in the documentary on climate change, “Time to Choose,” by Academy Award winner Charles Ferguson.

July 2015: Monkeys to the Rescue: A group of monkeys bands together to protect a fellow primate – a human researcher, Discover Magazine

September 2013: Humans would be better off if they monkeyed around like the muriquis, Smithsonian Magazine

June 2013:  Karen Strier was made an honorary citizen of Caratinga, Minas Gerais:

September 2021: Strier Lab member Christine Grebe has successfully passed her preliminary examination and has fulfilled the necessary requirements to become a dissertator.

August 2021: Karen Strier is the UW-Madison Department of Anthropology’s featured anthropologist for August.

March 2021: Strier Lab member Irene Duch-Latorre has successfully passed her preliminary examination and has fulfilled the necessary requirements to become a dissertator.

July 2020: Irene Duch-Latorre has received her M.S. degree in Anthropology.

May 2020: Strier Lab member Irene Duch-Latorre has successfully passed her qualifying examination and has fulfilled the necessary requirements to proceed in the Ph.D. program.

April 2020: Mary Dinsmore successfully defended her dissertation (remotely) on “The impacts of anthropogenic and natural disturbances on the behavior and habitat of northern sportive lemurs (Lepilemur septentrionalis) at Montagne des Français, Madagascar”. 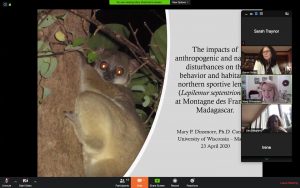 March 2020: The Strier lab hosts Dr. Christopher Schmitt, an assistant professor at Boston University. He also gave a talk on “Modeling the Evolutionary Origins of Obesity: Progress and Prospects in the Vervet Monkey, Chlorocebus spp.”.

February 2020: Dr. Yaya Rayadin from Mulawarman University and ECOSITROP, with his collaborators Sugiono Hanggito, a Master’s student at University of Texas-El Paso, and Dr. Stephanie Spehar, an associate professor at University of Wisconsin-Oshkosh, visited the Strier lab. Dr. Richard McFarland and some of his graduate students, and Gisela Sobral, also joined us to welcome the orangutan specialists. Dr. Rayadin graciously presented his work on Northeast Bornean orangutans (Pongo pygmaeus morio) in multifunctional landscapes. 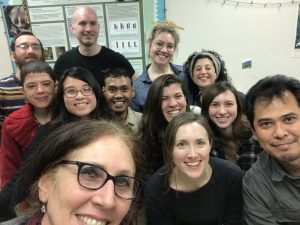 January 2020: Strier lab member Irene Duch-Latorre, along with her advisors and her collaborators, has received donated equipment from IDEA WILD and has also been awarded a Student Research Grants Competition Research Travel Award for her project on the brown-headed spider monkey (Ateles fusciceps fusciceps) in Ecuador. 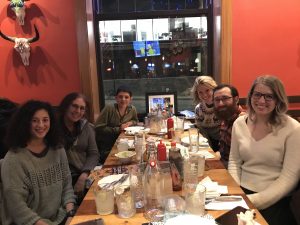 Strier Lab member Jacob Kraus has successfully passed his preliminary examination and has fulfilled the necessary requirements to become a dissertator. 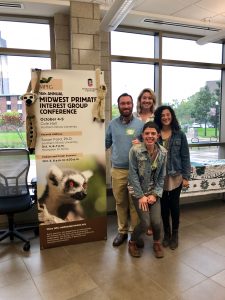 September 2019: Strier lab member Rebekah Ellis has successfully passed her qualifying examination and has fulfilled the necessary requirements to obtain a Masters degree in the Department of Anthropology.

August 2019: Strier lab member Mary Dinsmore spent a few weeks this summer teaching a study abroad course with the company, Broadreach. The course, Sea Turtles and Dolphin Studies of the Mediterranean, spent time in the south of Italy and Greece. Highlights included conducting a necropsy on a loggerhead sea turtle, conducting dolphin surveys and recording vocalizations on Stripped and Risso’s dolphins, and participating in turtle nest surveys in Crete! 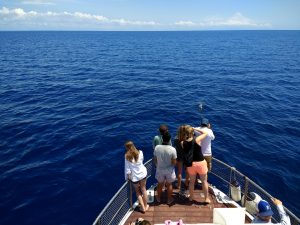 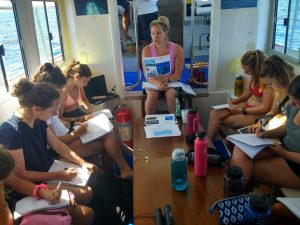 Jacob Kraus has recently returned from Baimaxueshan Nature Reserve, China, where he collected pilot data on the behavioral thermoregulation of black-and-white snub-nosed monkeys (Rhinopithecus bieti) in preparation for his PhD dissertation. Jacob’s research will be conducted in collaboration with the Institute of Eastern-Himalaya Biodiversity Research, led by Dr. Xiao Wen, at Dali University. 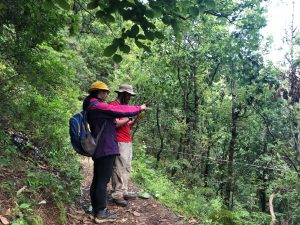 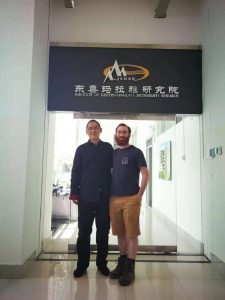 Irene Duch Latorre conducted a pilot study for her project on the brown-headed spider monkey (Ateles fusciceps fusciceps) at the forest Río de Oro (Ecuador).  Along with her collaborators, including an interdisciplinary team of field assistants, parabotanists, and local guides, she censused the primate community, gathered baseline information on the mammal and flora diversity, and started raising conservation awareness. Irene also delivered a talk on the conservation of the brown headed-spider monkey at the Sustainable Management of Biodiversity Symposium in Bahía de Caraquez, Ecuador. 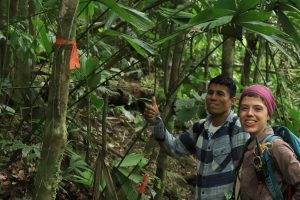 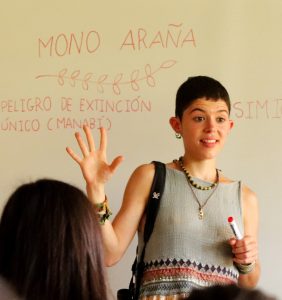 August 2019: Dr. Karen Strier delivered the keynote address, “Primates and Conservation  in the Time of Yellow Fever”, at the 42nd annual conference of the American Society of Primatologists. 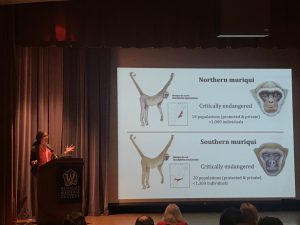 Dr. Strier was also a collaborator on several other  podium/poster presentations and workshops at the conference including: 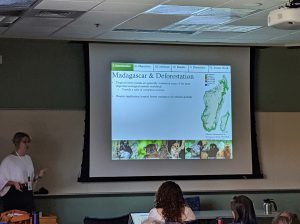 April 2019: Irene Duch Latorre’s photo of pygmy marmosets was selected as a winner in the Cool Science 2019 photo contest held by the University of Wisconsin-Madison. The winning photo is pictured below. 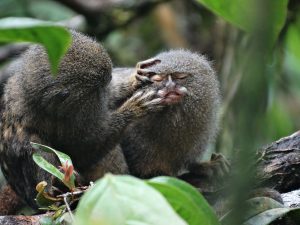 April 2019: Jacob Kraus was awarded a Graduate Summer Research Award with the Department of Integrative Biology at the University of Wisconsin – Madison.

April 2019: Ilianna Anise was awarded a William C. Burns and Lemuel A. Fraser Teaching Enrichment Scholarship from the University of Wisconsin – Madison.

February 2019: AJ Hardie was elected as the student member of the Biological Anthropology Section (BAS) of the American Anthropological Association (AAA).

January 2019: Lab member AJ Hardie observing howler monkeys for their PhD dissertation at the RPPN Feliciano Miguel Abdala. Photo taken by our collaborator, Sérgio L. Mendes, during his and Karen’s recent visit.  For a few more photos from the field, see: 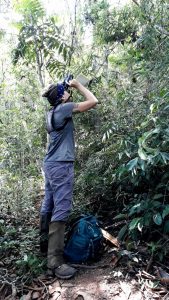 October 2018: Dr. Karen B. Strier and Dr. Toni E. Ziegler published a commentary, “From the field to the lab: Muriqui endocrinology from a collaborative perspective”, in the American Journal of Primatology. 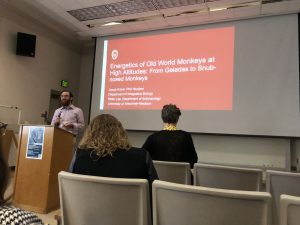 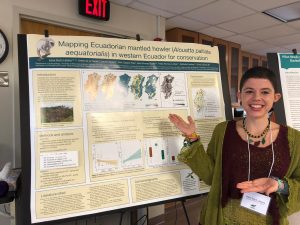 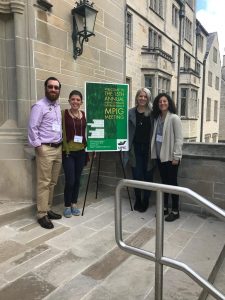 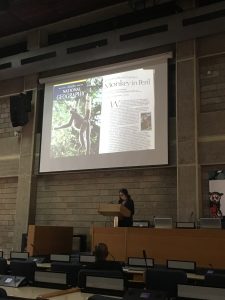 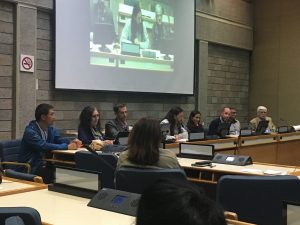 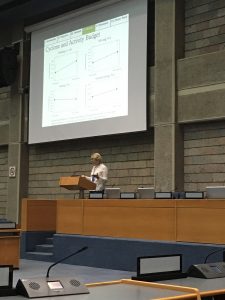 August 2018: Karen Strier is the first recipient of the Ai’s Scarf Award that started in 2018: http://langint.pri.kyoto-u.ac.jp/ai/en/news/wcd/2018.html  The Ai ‘s Scarf Award is for celebrating the female scholars who dedicate their lives to promoting the research, conservation, and welfare of chimpanzees and the rest of the nonhuman primates. The scarf was created in 2017 for the 40th anniversary of the Ai project, and is based on the painting by the chimpanzee Ai.

May 2018: Jacob Kraus was awarded a William C. Burns and Lemuel A. Fraser Teaching Enrichment Scholarship from the University of Wisconsin – Madison

May 2018: Ilianna Anise and Jacob Kraus both received Graduate Summer Research Awards with the Department of Integrative Biology at the University of Wisconsin – Madison.

August 2018 – May 2019: Rebekah Ellis was awarded a Foreign Language and Area Studies Fellowship through the Latin America, Caribbean, and Iberian Studies Program at the University of Wisconsin-Madison.

April 2018: AJ Hardie was awarded an Early Career Grant from the National Geographic Society for their dissertation project, “The Behavior and Ecology of Brown Howler Monkeys (Alouatta guariba clamitans) in Brazil’s Atlantic Forest.”

April 2018: Dr. Karen B. Strier and Ph.D. candidate Mary Dinsmore both presented work at the annual American Association of Physical Anthropology conference in Austin, Texas. Dr. Strier discussed the impacts of climate change on primates and primatology while Mary shared her findings on the impacts of Cyclone Enawo on the habitat of the northern sportive lemur.

February 2018: Dr. Katie Hinde visited the Strier lab during a recent trip to the University of Wisconsin – Madison. 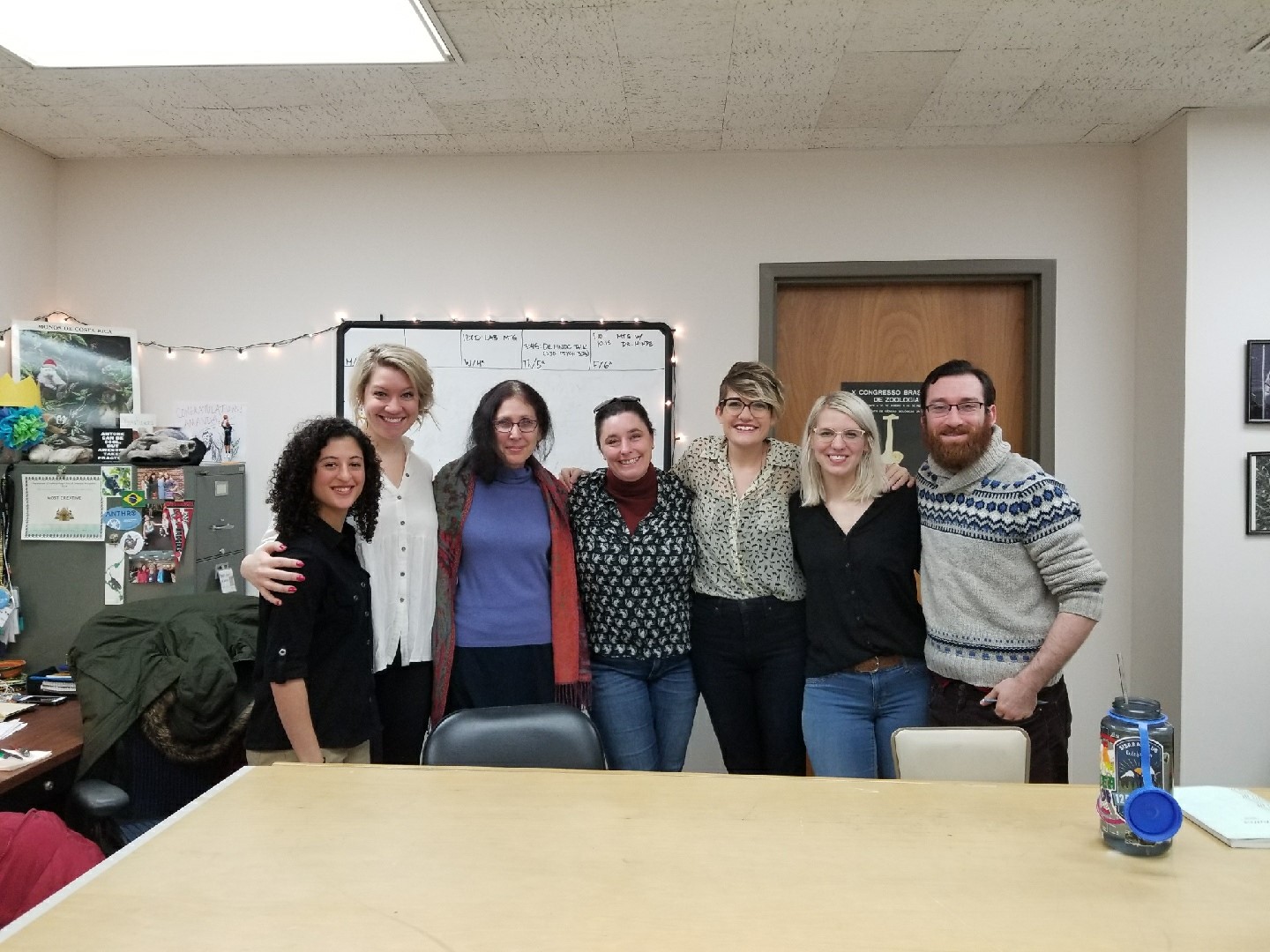 December 2017: AJ Hardie received funding from the Graduate School at the University of Wisconsin – Madison as well as the Department of Anthropology for travel for their dissertation research, “The Behavioral Ecology of Brown Howler Monkeys (Alouatta guariba clamitans) in Brazil’s Atlantic Forest”. 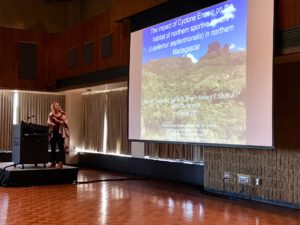 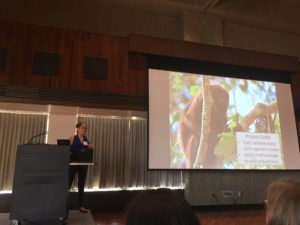 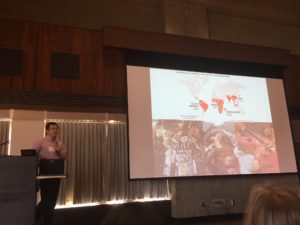 May 2017: AJ Hardie received the Robert J. Miller prize in Anthropology from the Department of Anthropology at the University of Wisconsin to support travel to the Buffalo Zoo in Buffalo, NY for their project, “A preliminary validation of urinary C-peptide analysis in captive black-and-gold howler monkeys (Alouatta caraya).”

January 2017: Mary Dinsmore was awarded a Primate Action Fund grant for her proposal, “The influence of anthropogenic activities on behavior of the northern sportive lemur (Lepilemur septentrionalis): implications for conservation.”

September 2016: Mary Dinsmore was awarded a grant from Conservation International’s Primate Action Fund and Margot Marsh Biodiversity Foundation for her proposal, “Assessment of Anthropogenic Activities and Their Potential to Influence Behavior and Range in the Northern Sportive Lemur (Lepilemur septentrionalis) at Montagne des Français, Madagascar.”

August 2016 – May 2017: AJ Hardie was awarded a Foreign Language and Area Studies Fellowship through the Latin America, Caribbean, and Iberian Studies Program at the University of Wisconsin-Madison.