The Muriqui Project of Caratinga is dedicated to the non-invasive research and conservation of the northern muriqui and its habitat.

The northern muriqui monkey (Brachyteles hypoxanthus) is one of the most critically endangered primates on earth. Fewer than 1,000 individuals are known to survive in only a dozen remaining fragments of the Brazilian Atlantic Forest. The Atlantic Forest is one of the five “hottest” hotspots for biodiversity, and the muriqui serves as an influential flagship for conservation efforts on behalf of this threatened ecosystem.

One of the last remaining strongholds for northern muriquis is a privately-owned, federally-protected reserve, known as the Reserva Particular Patrimonio Natural – Feliciano Miguel Abdala (RPPN-FMA), located near the city of Caratinga in the state of Minas Gerais. Although it is only about 1,000 hectares in size, this forest now supports more than 350 muriquis, representing more than one-third of the entire species. The success of the muriquis in this population is essential to the survival of this species.

The Muriqui Project of Caratinga is one of the longest running field studies on any wild, unprovisioned primate. Initiated in 1983, the Project has made significant discoveries about the behavioral ecology, reproductive biology, and life histories of muriquis that have advanced our scientific understanding of primates in general, and contribute directly to the conservation and management of this critically endangered species.

Muriquis are among the most peaceful primates known. They live in uniquely egalitarian societies in which males remain in their natal groups and females move between groups before the onset of puberty. Female muriquis have slow rates of reproduction, with the birth of their first infants at an average age of 9-10 years, and births at 3-year intervals throughout their unusually long life spans, which can exceed 40 years. Since the onset of the Project, the muriqui population of Caratinga has increased greatly in size, and ongoing research is documenting the influence of fluctuating demographic factors, such as infant sex ratios and survivorship, on the muriquis’ behavioral and ecological adaptations.

The Muriqui Project of Caratinga is directed by Karen B. Strier (University of Wisconsin-Madison), in collaboration with Dr. Sérgio L. Mendes (Universidade Federal de Espirito Santo). The Project has a long-standing tradition of training Brazilian students. Since 1983, more than 75 students and post docs have participated on the Project, contributing to the long-term, individual-based monitoring of the population. The Project maintains strong collaborations with Brazilian scientists and conservation NGOs, including Preserve Muriqui, the NGO that administers the Reserve. Our goal is to ensure that the muriquis and their forest are protected for perpetuity.

The video seen above was excerpted from video captured by a motion-triggered camera trap (TIGRINUS model 6.0, supplied with camera model DSC W320) at RPPN-FMA. Camera traps have been used to record terrestrial behavior in the Matão muriqui group, which has been studied by Karen Strier and students for since 1983. This video shows an adult male descending to the ground and traveling along a trail (no sound).

Video courtesy of the Muriqui Project of Caratinga/Dr. Karen B. Strier

The critically endangered northern muriqui (Brachyteles hypoxanthus) has been the subject of long-term field research in Brazil’s Atlantic forest since 1983.

This photo was taken by a camera trap. Credit: Karen B. Strier @ Muriqui Project of Caratinga. 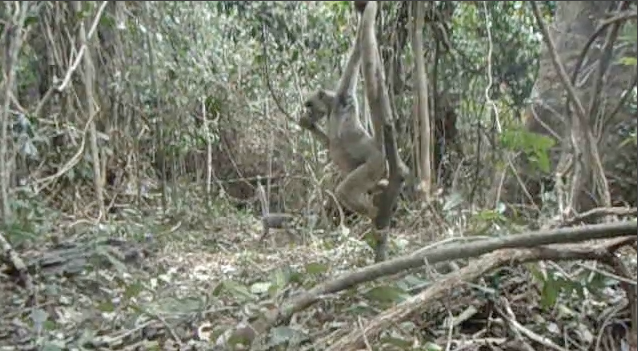